16.3hh Hanoverian RELEVANTUS aka Zorro (Rabino/Westminster/Weltmeister) Relevantus, who goes by show name “Zorro” has an extensive international record that includes the 2008 Hongkong Olympics, the 2010 WEG in Kentucky and a Mexican National championship with Federico Fernandez as well as multiple Grand Prix wins with Federico and Peter Wylde. His pedigree is full of high performance jumpers from his Holsteiner Sire Rabino to his Hanoverian dam line combining the highest indexed jumping lines from Grand Prix producers Rabino, Ramiro, Calypso, Ladykiller xx, the Hanoverian F line, Inschallah AA, Espri and Lugano I.

Black 16.2h Oldenburg stallion, listed for the Swedish Dressage team in 2008 and 2009 has 17 GP wins and placings including international wins in his name. Rubignon – Rubinstein/Donnerhall/Pik Solo, 4 generations of Grand Prix and international performance combined with fantastic character, temperament and type. Rubignon’s Dam “Una Donna’ is from the “Utoba” stamm with Samun xx and Vollkorn xx on the bottom. This Stamm produced the licensed stallions Azzarro, Landtinus, the International jumper Figaro’s Boy successful with Ludger Beerbaum and from Una Donna herself Racoon, Una Placida a successful jumper and Rubignon.

16.3H, bay, elite Hanoverian stallion, Landkönig completed his 100 day test at Adelheidsdorf as a three-year-old and was 7th out of 50 with 118.10 points overall and a 9.5(!) for stadium jumping, 8’s for willingness to work, character, temperament and the walk. Overall balanced on his jumping and rideability scores.

The Hannoveraner Jahrbuch Hengste 2005 lists Landkönig with a jumping breeding value of 132 putting him ahead of Ritual, Drosselklang, Espri, Escudo II, Grosso Z and many other top German Grand Prix producers! Landkönig is in fact the highest rated jumper listed, standing in the U.S. listed in the 2009 Stallion yearbook with a jumper breedvalue of 135 and 140 for ability, slightly higher than super producer and 2007 stallion of the year Argentinus.

Landkönig has produced, from his first foal crop, a licensed Hanoverian stallion son and in 2002 broke the record for producing the highest selling jumper ever in the history at the Hanoverian Elite auctions in Germany. Lantinus, a four-year-old gelding sold for Euro 215,000 also setting the record price for the Hanoverian auction year, something never done by a jumper!

We are sorry to announce that our beautiful Pablito passed away in the spring of 2018.

16.2 hh Hanoverian dressage competitor with many wins and placings and already multiple offspring at Grand Prix Level. Winner of the 100-day stallion testing in Germany with over 140 points! Over 147 points in dressage/ridability. Although he is a fantastic mover, he also received a 9 on jumping. Wild Dance is by one of the best Weltmeyer sons, Wolkenstein II, out of a States Premium mare by Matcho AA. This bloodline combination has proven exceptional. Leoni Bramall and Hubertus Schmidt both publicly stated that Wild Dance has an exceptional temperament and willingness to work.R

Graf Top II has been sold.

Graf Top II’s pedigree contains the finest jumping blood available in Hannover today. Graf Grannus (9th in the Top List Jumping Index) has an excellent character and well-above-average ability in all disciplines. Grannus, a legend in his own lifetime, was a successful show jumper to the advanced level. Calypso II carries his sire’s rideability, good character, phenomenal jumping ability, and perfect bascule. Graf Top I , fourth on the index of top jumpers for 2002, is siring top jumpers in Germany. His licensed son Gray Top is the latest jumper sensation. The dam of Graf Top II is a full sister to the dam of the Celle stallion, Laptop. The grandmother of Graf Top II and the mother of Spartan are full sisters.

In 2001 and 2002, Graf Top II competed in Training and First Level Dressage, qualifying both years for the CDS Championship Dressage Show with scores in the 70s and winning 2nd place nationally in the USDF Vintage Cup Award. He has received scores of “9” for his gaits. He competed in Level III jumping in 2002. His foals have won many premium awards and are described by the commissions as elegant, athletic, and show excellent movement and natural jumping ability.

Graf Top’s brother, Graf Top, is the second highest valued jumper horse producer in Germany. According to the Hanoverian breed value estimation, Graf Top by Graf Grannus, standing at stud at the breeding station Süstedt of the State stud Celle, made the largest leap forward with a score of 171, largely because of his offspring presented for participation at Verden’s auction program.

Rolex by Rubignon, owned by Suzie Worthington Skellenger. Now under saddle, Rolex will be inspected and, if approved, added to our stallion roster in late 2018.

We are proud to announce a new stallion 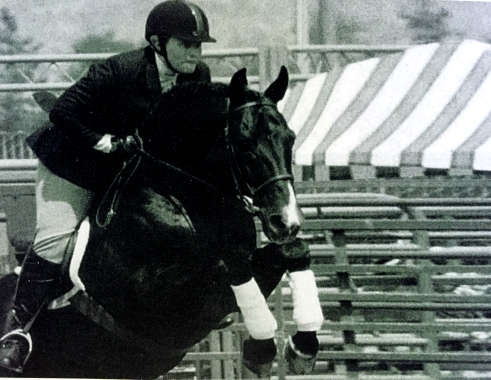 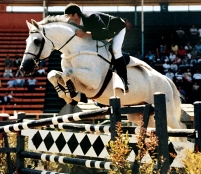 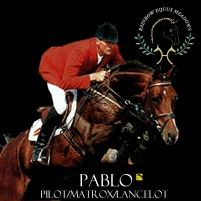 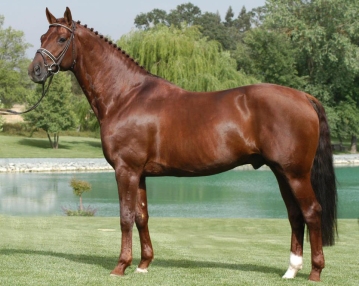